Below you’ll find our committee’s consultation paper that includes proposals for the progression of Freeport. After reviewing, please click here to fill out this survey to give us your feedback on the objectives and ideas presented.

This consultation paper is neither a report nor a promotional document. It provides a factual and objective briefing to the people of Freeport, and others who have an interest in Freeport, on the context and current work of the ‘Committee For Revitalization and Expansion of Freeport’s Economy’ (REEF Committee).

The deck outlines real solutions that the REEF Committee proposes, to permanently transform Freeport’s economy and set it onto a new, sustainable and far more positive economic trajectory.

Please read it carefully and provide feedback as invited in the final section: “What we need from you.”

Under the Hawksbill Creek Agreement (HCA) in the 1950s, Freeport became one of the first ‘free zones’ in the modern world. Over the past decades, the city’s regulatory framework and the incentives offered to investors have fallen behind those offered by rival free zones, regionally and elsewhere in the world.

Hurricane Dorian, the worst of a succession of devastating storms to pummel Freeport in recent years, highlighted how vulnerable the city is to storm surges and rises in sea level induced by climate change. If Freeport is to prosper, then it needs to be made safe from storm surges.

Covid-19 has decimated the Bahamian tourism industry, creating dire economic distress for the country as a whole and for many individual Bahamians. Even as the pandemic recedes, it seems highly likely that the tourism industry will be very different in the future. If Freeport is to prosper, its economy needs to be diversified by encouraging significant growth in a range of other sectors, as well as tourism.

Freeport has become a difficult place to do business, especially for foreign investors and workers. The roles of the GBPA under the HCA and Government have become blurred and confusing. Investors face complex and sometimes subjective processes when trying to establish and sustain operations in Freeport. If Freeport is to prosper, these need to be clarified and radically streamlined, in order to successfully compete with rival free zones seeking to attract the same investors that we are.

The Covid-19 crisis, on top of Hurricane Dorian’s aftermath, make it crucial that Freeport’s challenges be addressed and definitively resolved, now. The city’s economy is in a dire state, along with the circumstances of its residents.

The REEF Committee is an initiative created by the GBPA to engage with its licensees and the wider Freeport community to create an action plan (not just an ‘aspirational report’) to fundamentally transform the city.

Albert Einstein is reputed to have said that insanity can be defined as doing the same things over and over again and expecting different results. Many of the solutions that the REEF Committee have proposed will require a radically different approach in Freeport. The GBPA is committed to Freeport’s economic growth, resilience to future shocks and the prosperity of its residents, and is keen to explore all options, in collaboration with Government and the people of Freeport, to achieve those ends.

This deck outlines the key issues and possible solutions that have been identified by the REEF Committee. Your input is sought on these. Which of the proposed solutions do you think would be most transformational to Freeport’s economy and its people? To make it possible to implement the proposed solutions, how does the relationship between the GBPA and Government need to be improved? What incentives need to be offered to investors, to make Freeport more attractive than rival cities and centres that seek to attract them? What needs to be done to ensure that Bahamians benefit as much as possible from the growth that would result?

What options exist to fund measures to safeguard the city from storm surges AND diversify the economy AND optimise the benefits of growth for Bahamians?

Please let us know what you think, by completing the survey and/or providing written submissions.

12 Steps that need to be taken immediately

12 steps that need to be taken immediately

The REEF Committee’s remit is to create an action plan, not just (yet another) report, so the focus is on specific solutions – not general aspirations and ideas. However, defining and differentiating the ‘value proposition’ that Freeport offers is a fundamental issue that the REEF Committee identified at the outset of this process. Examining the solutions proposed so far, key themes emerge that could form an overall framework and brand. What do you think?

The Bahamas is a nation of islands and seas. The maritime economy is well developed and understood. Freeport Harbour and its surroundings offer a long-identified opportunity to develop an industry cluster consisting of a wide range of businesses related to the maritime and logistics industries. If sufficient critical mass could be established in these sectors, this would create the opportunity to brand Freeport something like ‘The Maritime Gateway to the Americas.’ What do you think?

The ‘Sea Air Business Centre’ (SABC) features prominently on the Freeport Harbour website, including artists impressions of what it could look like. Its physical location between a major container port and an airport, close to major international markets, makes it similar in many respects to to the Jebel Ali Free Zone (Jafza) in Dubai, which generates roughly $9 billion each year for the United Arab Emirates economy, sustains >135,000 jobs and handles nearly $100 billion in trade, annually. The SABC is prone to flooding during hurricanes and restrictive immigration policies limit access that companies wishing to establish there (or elsewhere in Freeport)  have to the global talent pool. If these two obstacles could be resolved, what others would need to be addressed in order for Freeport to become and be widely recognised as a major global logistics hub?

1 billion people around the world live along coastlines where changing ecosystems and frequent climate catastrophes threaten economies and ways of life. Creating systems to sustain these vulnerable communities is more important than ever, and the urgent demand will drive a projected $23 trillion market for coastal resilient solutions. Branding Freeport overall with a ‘Blue Economy’ theme and creating an environment that is especially attractive to companies and others developing such solutions might be a good idea. Many of the REEF Committee’s proposed solutions have a strong ocean component to it and the Bahamian tourism product is inextricably linked to the sea and seashore. It would also link well with the Maritime theme. What do you think?

Many of the solutions proposed by the REEF Committee are interconnected. Projects that focus on safeguarding against stormwater surges, and sea level rise, and reduce over-dependence on tourism would create benefits generally for Freeport, greater Grand Bahama Island and The Bahamas as a whole. For instance:

Significant increase in job and entrepreneurial (business) opportunities for Bahamians

The REEF Committee’s remit is focused on finding specific individual projects that can be properly funded and implemented. Once the specific projects are identified, attention can move to building those into a new master plan for the City, well integrated with the rest of Grand Bahama Island, to create a ‘model’ modern, sustainable, prosperous city that meets and exceeds the quality of life and career/business opportunities

The REEF Committee is an initiative of the Grand Bahama Port Authority, in partnership with leaders of some of Freeport’s leading businesses.

It is intended to supplement and be collaborative with the Government of The Bahamas and to supplement its Economic Recovery Committee (ERC) initiative.

The committee’s strategic intent is twofold:

(1)  To develop a long-term action plan that will fundamentally transform Freeport’s economy, diversifying the economy away from over-dependence on tourism and safeguarding the City and its people against future storm surges and sea level rise.

(2)  To identify short-terms actions that can be taken immediately, to relieve distress and set the City on the road to recovery following the devastation caused by Hurricane Dorian and the Covid-19 pandemic.

The REEF Committee’s objective is to make a profound, sustainable, positive difference to Freeport.

The intent of this report is to brief the people of Freeport on the process and to seek input on the initial proposals that have been generated by the committee.

Members of the REEF Committee

The members of the REEF Committee 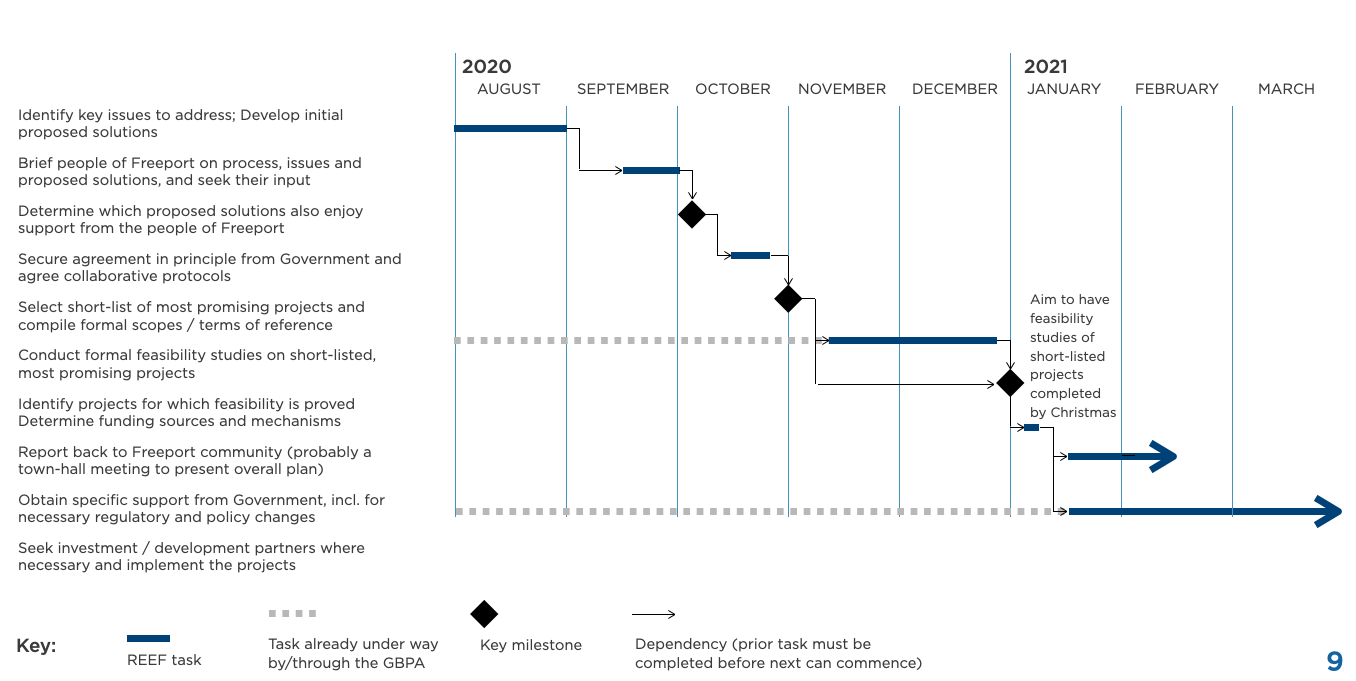 Note: The RAND hospital is a Government facility and the responsibility of Government, not the GBPA.

What we need from you

Please let us have your feedback

Help us fine-tune Freeport to fit your needs.